Following his unique same-day publication of poetry collection Still and novel Please, Christopher Meredith talks to Diana Wallace about writing, and not writing, poetry and prose

Very few writers are equally good at poetry and fiction. Why do you think that is?

First, it may be that there are more writers who are roughly equally good in both forms than we may think. It’s just that we tend to think of them as either one or the other. George Meredith and Hardy are major examples in English.  There’s Dunmore, Carver. George Mackay Brown’s Magnus is a fine novel, though I don’t know his other fiction. Many may say Glyn Jones’s extraordinary short stories are on a par with his poetry, and of his three novels one is a masterpiece, and there’s his friend, DT, who did a bit in both codes. In Welsh, Caradog Prichard produced one masterpiece in fiction, another in autobiography, and a fine body of poetry.

I think there may be unequal perceptions of the two driven by economics and notions of status that may affect, even skew, how we see writers, and sometimes how they see themselves. Prose and poetry have distinct if sometimes overlapping economies, sets of publishers, readerships. Atwood the novelist is also big business, a film and TV franchise, a household name. Atwood the poet is Atwood the poet. Whatever the reality, her poetry will be perceived as some sort of appendage because of the scale, money, and pulling power of her long fictions.

But I don’t make that sharp a distinction between poetry and creative prose. To misquote Coleridge, for me they should both be the best words in the best order. In prose you generally have to flood the pages, often many of them, with words with only the paragraph and section break to make shapes. In a sense, creative prose is, for the writer, a very demanding form of poetry.

I know some others writers just don’t see it this way, and perhaps that gives a clue to why they work more happily in one form than the other.

In your own writing do you find certain subjects lend themselves more to poetry than to prose? Or it is about time?

I don’t think so. It’s hard to think of the ‘subject’ as something entirely separate from the piece. I think I always know whether a piece is going to be a poem or fiction at the outset, whatever the subject. One thing that may affect this is where consciousness resides, if anywhere, in the piece. I, or some version of ‘I’, am more likely to turn up in a poem whereas ‘I’ never really show up in the fiction (though the narrator of the short story ‘The Enthusiast’ is close in some ways). But in Still there are only a handful of personal ‘I’ poems, and even in most of them the ‘I’ isn’t anywhere near being the ‘subject’. Most of the poems are in fact impersonal in this sense. I suppose very broadly that a piece likely to deal with the immediately personal, or more impersonally with a moment, or something of the materiality of the world – a tree, an empty room, a seaside pier – without the intervention of a perceiving ‘character’ is more likely to tell me it wants to be a poem. The latter points touch on qualities that I think of as making a lyric – the often intense apprehension and enactment in words of some materiality or moment without any emphasis on or even representation of a perceiver. I think this chimes with the way that using the second person can often be more effective and acceptable in poetry than in prose.

But prose fiction can demand such moments too, of course. And in Still there are two poems which are in effect dramatic monologues, so none of these thoughts amount to rules, and the borders between poetry and prose are porous and shifting.

Please has a very striking first line: ‘Punctuation killed my wife’. Which came first – the line or the story – and how did it develop from there?

This is the only time this has happened to me. The first sentence came first. I had it in my head for several years with no idea where it was going. I eventually started what I thought might be a short story and got a short novel instead. I realise now that the sentence contained a whole drama, with two characters, a weird ‘voice’, a catastrophe and a mystery. It was also elegantly balanced and slightly mad. All of that unpacked itself and grew, like cells dividing. As the narrator Vernon’s peculiar prose emerged it grew very demanding, as he constructs sentences in ways I never do.

You’ve written brilliantly, and unusually, about the important role of work in our lives.  Vernon works in ‘Human Resources’ (what used to be called ‘Personnel’ as he reminds us). How does this novel relate to your thinking about work?

Thanks. I’m not yet sure what the answer to this question is, but here are some initial thoughts. Vernon’s retired and in his eighties as he writes his story, which spans fifty-odd, very odd, years. I’ve said that any half-way decent novel can’t help dealing in ideas, whether it wants to or not. I think the same isn’t always true of short stories. As the piece grew beyond a short story, moving from the 1960s to recent times, it started to shed sly sidelights on some historical shifts, including shifts in attitudes and language. Personnel was plausibly a job an underqualified young man might rise in, and could also allow him to move round the country, which suited the story that developed. Vernon watches the world shift around him, but of course he’s implicated in it and participates in a minor way in the mass destruction of jobs in the 80s. The book’s focus is mainly on his marriage and his linguistic obsessions, but out of the corner of his eye, so to speak, we watch him watch himself in this role. In a way the reflexivity of his job – work about work – mirrors the reflexivity of his passion for language – words about words. In both cases the reflexivity can be obscuring but can also paradoxically lead to insights.

Your last poetry collection was called Still Air and this new one is called Still. The word ‘still’ clearly has particular resonance for you. Why is that?

I noticed the word ‘still’ recurring in my work, as I’d noticed earlier with the word ‘air’ which had fed into the collection Air Histories. In some ways it goes back to my novel Sidereal Time, in which one of the characters yearns to freeze time. The world is dynamic, and we associate movement with vitality – for instance: we say someone’s ‘lively’ when they move a lot; think of that embedded euphemism in stillborn; and quick can be a synonym for alive. Yet we value stillness and it’s a crucial idea to much art, as well as religions and science. What seemed to start to emerge in the writing was the idea that being alive in the world means constant dynamisms at some level or other, but some kind of stillness is a necessary condition, perhaps a necessary fiction for us to remember and imagine, to apprehend and consider the world and being alive. It’s interesting that apprehend means both understand and arrest. Not all the poems are directly about this, but it emerges frequently.

Formally, these poems are very varied and subtly inventive. Are there particular forms of experimentation which interest you at the moment?

The final sequence in Still uses a thing I call river rhyme which I first developed in a few poems in Air Histories. This aligns some rhyming or echoing words in different lines vertically by indenting the lines so that the poems make an irregular shape down the page. I’ve done this only with poems where such a shape has a sort of somewhat abstracted visual connection with the material, so these are poems about trees, plants, whirling snow. It’s a difficult technique to execute and very difficult to get right in print so it’ll only continue if the poems demand it.

Elsewhere, there’s a sort of sonnet, ‘Nightfall’ in which each line is broken in two. I used something similar in a poem in Air Histories, though for completely different reasons.

Sometimes, if it doesn’t emerge immediately, finding the line can be central. I notice in at least four poems in this collection that a two-beat line predominates. In a couple of these I was using it to make short-lined quatrains to particular ends. The other two, ‘Horseshoe crabs’ and ‘Steampunk jungle’ deal with strange and disorientating encounters with the natural or semi-natural world and I see now that their short lines and the frequent occurrence of off-beat line endings try for an unsettled and relentless feel that attempt to enact the restlessness of the pieces.  I wrote ‘Steampunk jungle’ second (it deals with an experience from 2017 but wasn’t written till 2020), but I stumbled towards finding the line in drafts and even when it was finished didn’t realise at first that it bore a little resemblance to the line in ‘Horseshoe crabs’. The line-lengths and mingling of beat and off-beat line ends owe something to Welsh poetry, too.

Though it draws on what you know, form emerges of a piece with the poem and it’s hard to predict what will come next.

Both books have single word titles. Are there connections you can see between Please and Still?

Others may want to look for them.

What do you enjoy most about the writing process?

It’s hard work and enjoyment often has little to do with it. I spend a lot of time avoiding writing and quite happily not writing. Even so, though it gets more demanding the more you know, I get closer to enjoying writing now than in the past. I enjoy seeing an old, familiar word come silently out of the end of the pen and become somehow a completely new-minted thing, so that its power to convey meaning and sensation startles me. I once said to a friend, ‘My life would be so much simpler if I didn’t write.’ He gave me an old fashioned look and said, ‘But you do.’

What are you working on now?

I’m not working on several unfinished poems, and neither have I got the beginning of a novel currently at the ‘abandoned’ stage.

Still and Please are available from Seren. 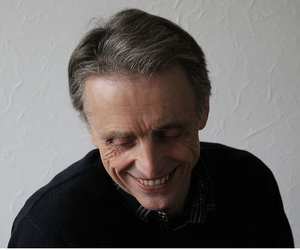 Emeritus Professor Christopher Meredith is an award-winning novelist, poet and translator, the author of five novels, a volume of short stories and six collections of poetry. His debut novel Shifts won an Eric Gregory Award, the Arts Council of Wales Young Writer Prize and the Fiction Prize. His second novel, Griffri, was shortlisted for the Wales Book of the Year Award. His collection of poems, The Meaning of Flight, was long listed for Wales Book of the Year in 2006. He has broadcast on radio and TV and given readings and talks all round Britain as well as in the Czech Republic, Egypt, Estonia, Germany, Finland, Ireland, Slovenia and the USA. Born and brought up in Tredegar, he has been a steelworker, a schoolteacher and a university professor and now writes full time.