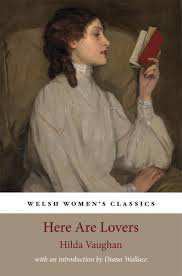 Set in nineteenth-century Radnorshire, Hilda Vaughan’s Here are Lovers (originally published in 1926) is the story of Laetitia Wingfield, the beautiful and bookish daughter of the Anglicised Squire Wingfield, and Gronwy Griffith, the son of one of his Welsh tenant farmers, who longs to be a classical scholar.

Bored and frustrated with the restricted life of a Victorian young lady, Laetitia encounters the romance she so longs for when she becomes lost during a clandestine night-time ride and is rescued by Gronwy. One of the few novels to centre on an election, Here are Lovers is a highly accomplished historical novel which reworks the tradition of Sir Walter Scott to address issues such as women’s suffrage which were still highly contentious in the mid-1920s.

Professor Diana Wallace, editor of ‘Here are Lovers’, gives the background to this intelligent and gripping novel.

What is Here are Lovers about?

It’s a love story about the daughter of a squire and the son of one of his poorest tenant farmers set in mid-Victorian Wales. Laetia Wingfield and Gronwy Griffith are both trapped by circumstance. She’s bored and frustrated by her life as a Victorian young lady, while he desperately wants to be a classical scholar. It can’t end well.

Why did you want to see this book in print?
Because as well as being a love story it’s also an anti-romance – a critique of the ways in which romantic ideals can entrap us just as much as material circumstances do. It’s a kind of mixture of Wuthering Heights and Northanger Abbey. And it’s a beautifully written evocation of the Welsh countryside.

What bits did you enjoy the most?

Actually, some of the best bits are the courtship between Gronwy’s brother Peter and Elizabeth, the daughter of a local farmer, which is a kind of parallel story. There’s a lovely scene where he climbs up into her bedroom at night to court her. It’s an old tradition called 'bundling’ or 'caru yn y gwely’ which the Anglicised squirearchy tried to stamp out.

The novel seems modern. Was Hilda Vaughan ahead of her time?
In many ways. She was a very interesting women – the daughter of a country solicitor, she was brought up in Builth Wells but then moved to London to become a writer (against her family’s wishes) and married the very successful novelist Charles Morgan. Like a lot of modern women she was juggling being a wife and mother (they had two children) and her work. There’s a rather telling bit in one of Morgan’s early letters to her when they’re planning a life together where they can both write and he tells her that of course it’ll be her responsibility to make sure they have something to eat in the evening.

You can buy 'Here are Lovers’ online from Honno.