‘Larktown Suite’ is a sequence of poems based on traditional songs. In the past, events such as outbreaks of plague, disasters and social crises were memorialised in popular ballads. I wanted to revive the tradition in response to the Covid-19 pandemic.

Each poem in the sequence (apart from the first) rewrites a traditional song. The crow imagery evokes the association of such birds with bad luck and death, but also plays on the similarity between the words covid and corvid (corvidae being the Latin name for the crow family). The name of the fictional town in which the poems are set, is derived from American pronunciations of lockdown as I heard them on news bulletins.

Corvid – a bird of the crow family

19 – in numerology combines beginning and end

I came to Larktown soon after dark;

streets were all empty,

and shutters were down.

I came to Larktown seeking the lark

down on the green

in the centre of town.

I woke in Larktown soon after dawn

the wind blew so cold,

I woke in Larktown; curtains were drawn.

Down on the green

I counted the crows.

I left Larktown soon after noon.

down on the green.

I left Larktown a day too soon.

In Larktown where my child was born

as all the buds were swelling

so many on their deathbeds lay

and so lay Barbara Allen.

I stood beside her bed and said

So many here are crying.

So many here are dying.

And in my dreams I saw them fall

when all the world was sleeping –

and all the people weeping.

I hear the bells of Larktown ring;

I ask for whom they’re ringing.

They ring for you, the doctor says,

and they ring for Barbara Allen.

Adieu, adieu, to all my friends

I hope that soon I’ll see them.

Then we will raise our glasses high

and drink to Barbara Allen.

Early one morning, just as the sun was rising,

I heard a Larktown woman cry out in the street:

Long was my day and hard were my hours.

I’ve tended the sick until I’m dead on my feet.

Think of the workers who shift through the night-time.

Why do you buy up much more than you need?

Oh where have you been, my daughter, so long?

And where have you been out under the sun?

I’ve been in Larktown and I need to lie down.

I’ve been in Larktown. Oh make my bed soon.

And what did you see, my daughter, so long?

And what did you see out under the sun?

I saw a young man who lay down on the green:

The handsomest man that I’ve ever seen.

And what did you do, my daughter, so long?

And what did you do out under the sun?

I lay down beside him and took off my mask.

I lay down beside him. Oh why must you ask?

What will you do now, my daughter, so long?

What will you do now, out under the sun?

I’ll lie in my bed now until my last breath,

And pray that my love is stronger than death.

So long, then, my daughter. My daughter, so long.

No more shall you meet him out under the sun.

drinking of his blood-red wine.

Where can I find a scarecrow

to save this town of mine?

Then up there spoke a bright young thing,

sitting at the Lord's right knee:

Sir Dominic is a scarecrow

as fine as there can be.

The Lord has written a letter now

and sealed it with his own fair hands,

and Dominic receives it

as he walks on Redcar sands.

so loud, so long, so hard he laughed.

Where the Lord drinks his draft.

Be it blight or be it plague,

Or be it but a carrion crow,

the Lord must be deluded

if he thinks I will go.

with all his papers in his hand,

before he sees Sir Dominic

come running as he planned.

And long, long may reporters sit

with cameras and microphones

waiting for the news to come.

catching at his troubled breath,

to come and catch his death.

Here’s one for the day the first crow arrived

Here’s nine for the last to have survived

Down among the lilies, O

Down among the lilies, O

Here’s nine for Larktown and nine for the globe

Down among the lilies, O.

One for the water as clear as glass,

One for quietest roads ever seen,

One for the sun on Larktown green.

One for the rushes, green as they grow,

Nine for us down in the lilies, O.

He broke every rule in the Larktown Code

Down among the lilies, O.

It was a summer's evening towards the end of May,

down to Larktown riverbanks I made my lonely way.

I overheard a woman to her company complain:

My lifelong love under the ground but yesterday was lain.

I stepped up to this woman, politely for to ask

if she should be out walking without her cotton mask.

She turns her eyes upon me. Stand back from me, she cries.

Keep full two yards between us. At dusk the black crow flies.

Far away from Larktown Banks, I plead that you will go.

Pity a poor woman who has nothing left to show

for all her panic buying, and the washing of her hands.

If my true love were here tonight he'd keep the crow from me,

but he's gone down beneath the earth and what will be must be.

When I heard this dreadful news, I fell into despair,

into wringing of my hands and tearing out my hair.

Now hearing her tell of her love, I could no longer stand.

I fell into her arms and cried: O let me be your man.

You are not him, she cried aloud, for he I love is slain,

and since we met on Larktown Banks, it’s here I will remain.

the Larktown police patrolled the streets to keep them quiet and clear.

And when the long patrol was done, they went down to the shore

and there they saw little Matty Groves and maybe fifty more.

The Lord of Larktown gives command and we must bide his laws.

My father drinks and my mother thinks he’ll lay her in the hearse.

The policeman scratched his head and said: I don’t know what to do,

for staying out here or going home may be the death of you.

A crow flew down and cawed at them, and landed on the sand,

and to the crow little Matty Groves stretched out an open hand.

I’ve no fear to have you near; come light on my right knee.

With one swift peck upon his neck, the crow struck Matty down,

and news of Matty’s dreadful death went swiftly round the town.

In Larktown he’s remembered as the boy no-one could save.

Are you going to Larktown Fair?

Remember me to all who work there

Tell them to go on a furlough so long

In no time at all ‘twill be over and gone

Tell them to trust that all will be well

All will be well on the far side of hell

Tell them there will be a vaccine and soon

Tell them to take it by the light of the moon

Are you going to Larktown Fair?

Remember me and all who died there 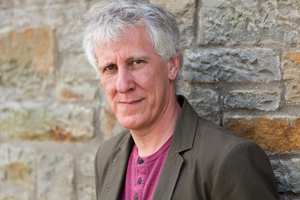 Professor Kevin Mills teaches undergraduate English modules on Nineteenth-Century and English Renaissance Literature, and a third-year module on Myth and Narrative, and is the course leader for the MPhil in Writing.

He is a founder member of Contemporancient Theatre: a small independent company producing new drama based on Welsh history and a member of the Centre for the Study of Media and Culture in Small Nations.

His latest poetry collection is available from Cinnamon Press.