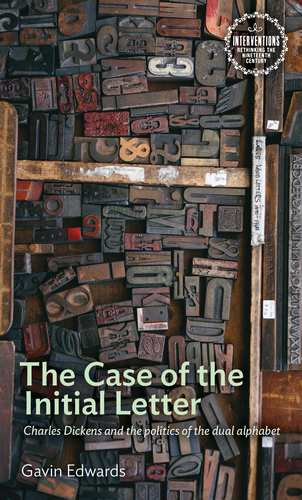 Emeritus Professor Gavin Edwards has published a book which examines the politics of capital letters.

His monograph, The Case of the Initial Letter: Charles Dickens and the politics of the dual alphabet, examines how writers in the nineteenth century used upper and lower case letters in the interests of a wider radicalism.

The visual difference between capitals and lower case letters which we tend to take for granted has important implications.  As Gavin says, ‘Elevated letters are for elevated things.’

So when a writer or printer upper-cases an initial letter – ‘Revolution’ rather than ‘revolution’, for instance, or ‘Woman’ rather than ‘woman’ – it has profound effects.

In the wake of the French Revolution, the journalist and critic William Hazlitt connected the dethroning of kings and queens to a literary rebellion by poets like Wordsworth against the established ways of writing, and printing, poetry. ‘Capital letters are no more allowed in print,’ Hazlitt averred, ‘than letters-patent of nobility are allowed in real life.’

No one was more aware of the politics of capitalisation than the novelist Charles Dickens as Gavin shows.

‘When Dickens tried to describe his 'political creed' to an audience at the Birmingham and Midland institute in 1869, for instance,’ Gavin explains, ‘some people in the audience were none the wiser. So when he went back the following year he literally spelt it out for them: "I have very little faith in the people who govern us - please to observe 'people' there will be with a small 'p' [Laughter'], but that I have great confidence in the People whom they govern: please to observe People there with a large 'P' [Renewed laughter].”’

The Case of the Initial Letter traces Dickens’s experimentation with capital letters through his manuscripts, corrected proofs and the prompt copies for his public ‘Readings’. But it also links Dickens with Marx, the suffragist Millicent Garrett Fawcett, and the poet Augusta Webster whose innovations anticipate later modernist experimentations.

The Case of the Initial Letter: Charles Dickens and the politics of the dual alphabet is published by Manchester University Press