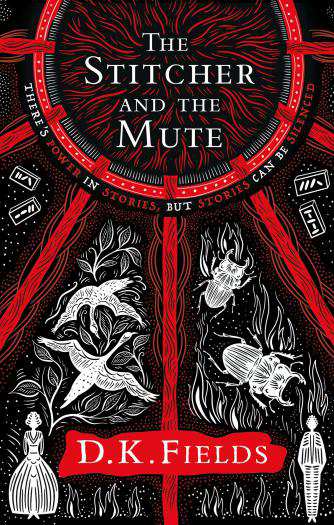 The Stitcher and the Mute, the second novel in a fantasy crime trilogy by D.K. Fields, the writing partnership of USW creative writing lecturer David Towsey and Katherine Stansfield, has just been published.

Set in the fictional Union of Realms during election year when storytellers compete for votes, the novel explores the power of stories and the price of power. The first novel, Widow’s Welcome, published last year, introduced readers to Detective Cora Gorderheim as she investigated the murder of a man found with his mouth sewn shut. In this follow-up Cora discovers that the murder was part of a much bigger tale and begins to piece together a conspiracy.

David says: ‘We’re really excited to share Cora’s next case with our readers, as well as a wider view of this world through the Perlish and Torn election stories. It was a lot of fun to write scenes with the Torn fighting beetles, the Perlish aristocracy, and to see how Cora would cope with leaving her familiar streets of Fenest. We can’t wait to see how readers vote…’

The third part of the trilogy, Farewell to the Liar, will be published in 2021.

The Stitcher and the Mute is published by Head of Zeus.