Research by Dr Mike Chick has helped to improve access to English language education for forced migrants in south Wales and informed government policy on ESOL (English to Speakers of Other Languages).

Since 2014, cuts to adult language education budgets combined with a rise in numbers of people seeking asylum have led to an urgent need for increased provision of ESOL. Language skills are essential to the integration of refugees and asylum seekers. Speaking English is key to accessing work and educational opportunities as well as helping with social and cultural integration. And yet forced migrants often face long delays before they can access English classes.

Working in collaboration with the Welsh Refugee Council (WRC) and Rhondda Cynon Taff local authority, Dr Chick has been researching the provision of ESOL to forced migrants in south Wales and beyond to provide solutions to this problem. During this work he has met and taught hundreds of refugees and asylum seekers.

His innovative collaboration with the WRC enables trainee language teachers from USW to offer classes to refugees. Since 2015, nearly 50 trainee teachers have taught hundreds of refugees. This work is showcased in the British Academy report, “If you could do one thing…” Local actions to promote social integration (2017), which features successful practical interventions which have a significant positive impact.

Since 2016, Dr Chick has also been working with officials and voluntary organisations in Rhondda Cynon Taff to advise on the provision of English classes for Syrian refugees who have been resettled in the area as part of the Syrian Vulnerable Persons Resettlement Scheme (SVPRS).

Working with the WRC, Dr Chick’s 2019 KESS-Funded research project examined the barriers faced by refugees who look for educational and employment in south Wales. It identified the ways in which language teaching can give refugees the skills which will help them to find work and integrate into their communities. USW photojournalism student Veronika Merkova has documented some of Dr Chick’s work. 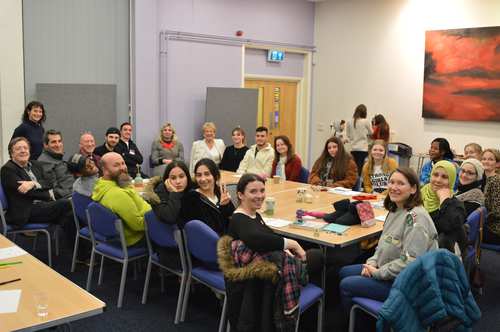 Speak to Me: language and wellbeing

Research by Senior Lecturer Barrie Llewelyn explores the links between writing and well- being.  In January 2020 her ‘Speak to Me’ project (funded by Literature Wales’s Literature for Well- Being Funding Scheme) brought together a group of refugees to work in partnership with local English speakers in a series of creative writing workshops.

This project built on the work of USW’s Dr Mike Chick and others who are dedicated to finding innovative ways to assist refugees with the acquisition of language skills. It is widely acknowledged that language skills are essential to the integration of refugees and asylum seekers and that local language competency is key to accessing work, education and opportunities.

Over five weeks participants were given prompts in the form of games and activities to explore themes such as celebration, food and friendship. The result was an exchange of stories between participants. As the weeks progressed, everyone involved became more confident and not just in regards to the use of language.

By working closely together, barriers were broken and there was greater understanding of each other’s cultures. Real and lasting friendships were formed. The room echoed with the sounds of stories shared from the heart, but there was also a lot of laughter. The project beautifully illustrated how integration is a two way process in which everyone benefits.

The group worked with student photojournalists and sound technicians, and with visual artists to produce an exhibition of words, photos and the sounds of the participants in conversation to showcase the achievements of the project. A virtual home for the exhibition has been created on the Oriel y Bont website.

Barrie’s goal is to continue the project with the same group and others. Lots of people have heard about Speak to Me and have asked to be involved. The goal output will be a picture book for children that might be useful to future refugees when they arrive in Wales. 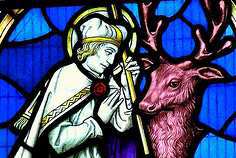 The stories of St Cadoc, one of founders of Christian Wales and an early contender for patron saint, have been brought to a wider audience by the research of Professor Kevin Mills.

Some 18 churches, four villages and two ancient monuments in south east Wales are named after St Cadoc/Catwg. Yet the history of this elusive and somewhat contentious figure is little-known, even in his home territory.  Professor Mills’ research on Cadoc led to an award-winning poetry pamphlet, Stations of the Boar (2016), a co-authored play, and a sequence of poems in his collection, Zeugma (2020).

Co-written with award-winning playwright and director Vic Mills, the play Cadoc and the Drowned Boys, opened at Blackwood Little Theatre in July 2019, before touring seven of the churches across south Wales which are named after St Cadoc.

An experimental piece of theatre, the play was designed to exploit the theatrical potential of the churches where it was performed, using minimal scenery and props. It reimagines the ancient tale of two young men who drowned in the sea between Barry and Flat Holm. This becomes the focus of a project by three modern-day drama students, played in this production by three professional actors – Matthew Curran, Jemima Nicholas and Gareth Price-Stephens. As their roles merge with those of the ancient characters, questions of faith, intolerance, morality and identity are explored.

The Western Mail reviewer praised Cadoc and the Drowned Boys as a ‘bold new play’ with contemporary relevance: ‘[the characters in the play] uncover a darker story than they could have imagined – one of abuse, misogyny and obsession. […] They find aspects of themselves, their lives and relationships laid bare, discovering that the historical characters they play have more in common with their real lives than they expected.’

As a result of this production, Professor Mills and Vic Mills formed the new CIC theatre company, Contemporancient Theatre,  to encourage communities to explore their own stories of past and present. The company are now working on their next project, based on Professor Mills’ research on Dr Richard Price, the Enlightenment philosopher from Llangeinor, near Bridgend, in south Wales.  Download St Cadoc: History and Legend by Professor Kevin Mills.